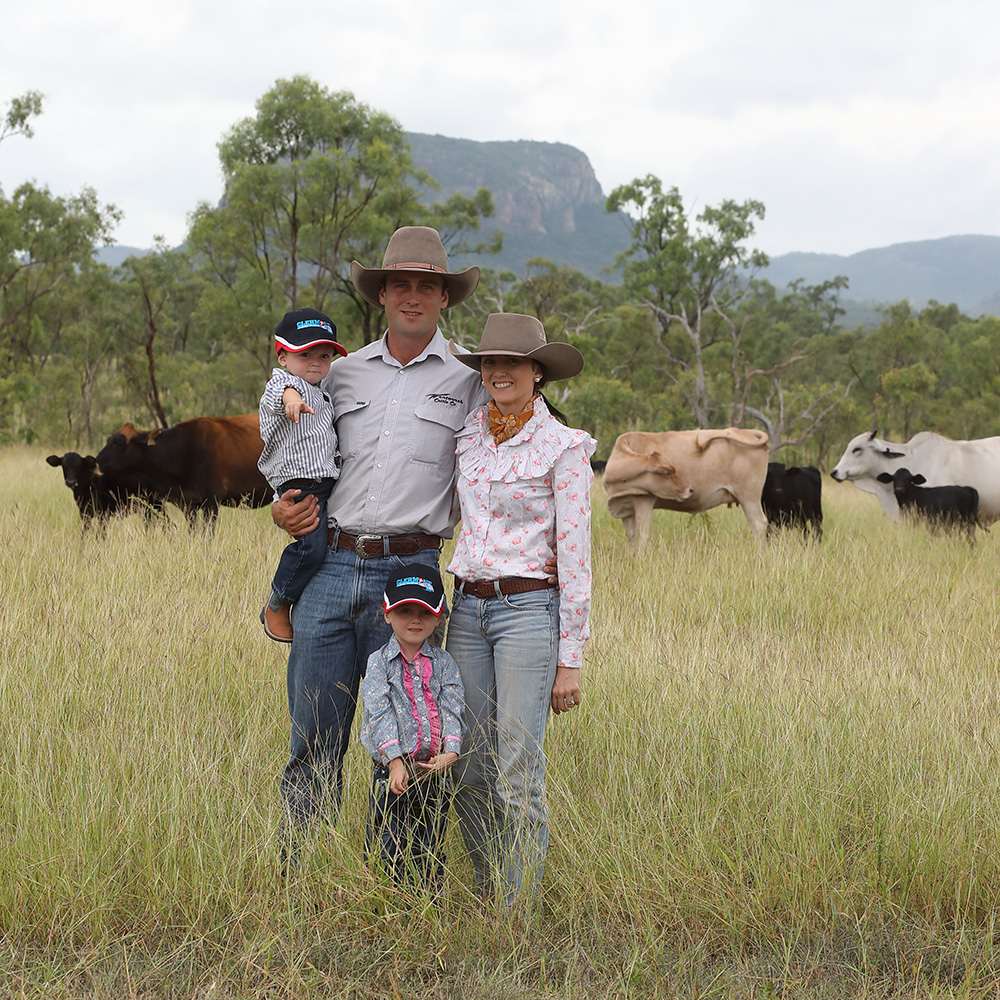 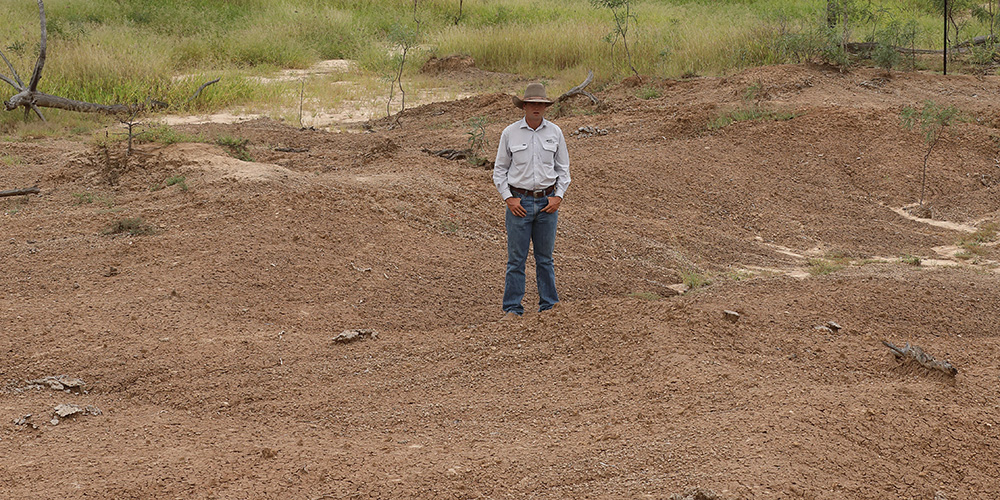 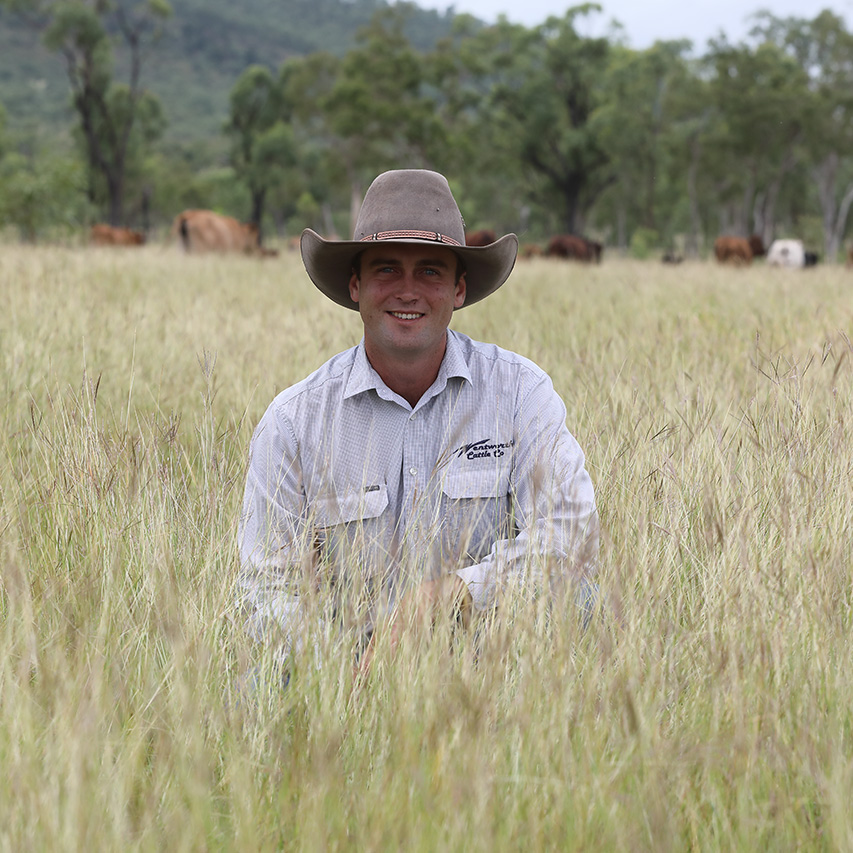 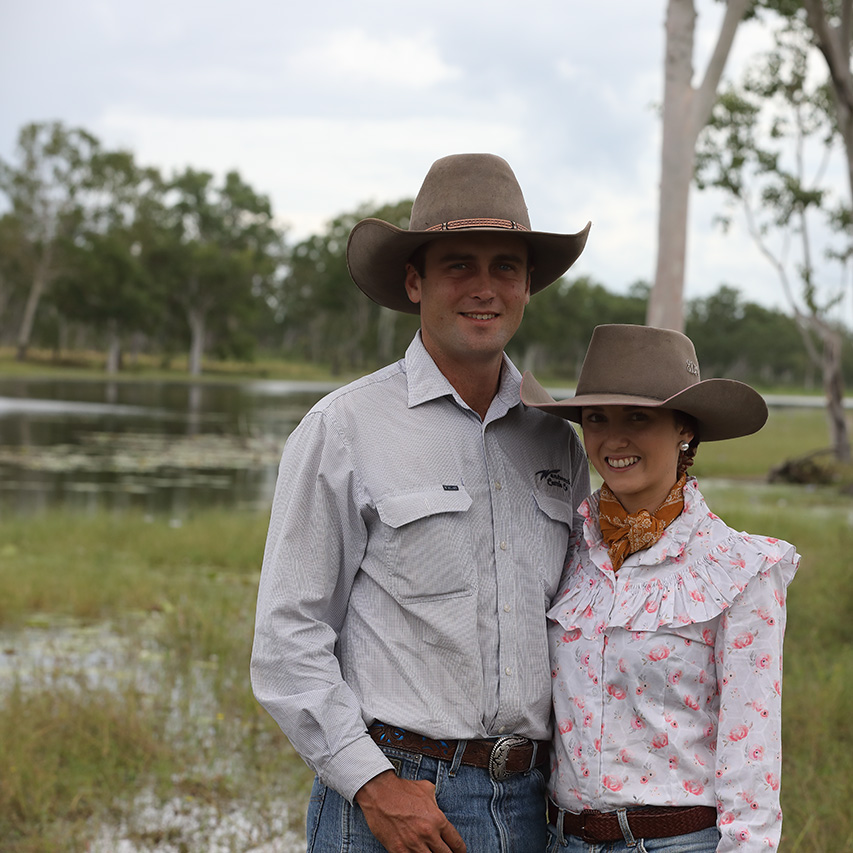 Improving the condition of grazing land has been at the heart of an ambitious five-year plan from a young and focused Queensland couple which has transformed the management and culture of a sweeping 33,200ha beef cattle operation.

Bristow and Ureisha Hughes manage ‘Strathalbyn Station’ near Bowen, grazing around 6500 head of breeding stock with Wagyu, Brahman and Red Poll genetics. The cattle are a major regenerative tool across a mix of soil types and diversity of grasses and legumes.

Close to the Great Barrier Reef, Strathalbyn acts almost as a catchment of its own, with Bonnie Doon and King Creeks running through the property, along with 28 kilometres of winding Burdekin River frontage, all of which is bordered by mountain ranges.

The station makes up part of a broader grazing operation ‘Wentworth Cattle Co’, working in conjunction with three other properties across Central Queensland owned by Bristow’s parents.

As a young farming family, Bristow (24) and Ureisha (27), along with their two small children, brought to Strathalbyn an eagerness to learn and a willingness to question traditional on-farm practices. Bristow’s parents had successfully worked with Resource Consulting Services (RCS) for 25 years, and in 2016 Bristow and Ureisha signed on to Project Pioneer to further value add these strong foundations.

The new approach built on strategic watering point placement which had been underway since 2004, while a new fencing regime provided the ingredient needed to transform land utilisation and grazing.

“The big turning point for us was putting together a five-year plan allowing us to implement large-scale development strategies that have completely changed the way we graze, the type of animals we graze – it’s a whole new way of looking at things,” Bristow said.

These far-reaching changes included the construction of 150km of fencelines, laying 90km of 75, 90 and 110mm pipe, the installation of 60 troughs, and 25 tanks to create a super-charged network of watering points, the core benefits of which have been reduced grazing ‘hot spots’ and more even distribution of grazing pressure.

“There was so much under-utilisation of parts of the property before and over-use in other areas, so we’ve basically been able to even out how we use the country, and this has allowed us to better care for the topsoil and the animals,” Bristow said.

Changes in the breed composition of the cattle run on Strathalbyn, high demand for Wagyu beef, good seasonal conditions up until 2017, and a strong cattle market in general has further facilitated the fast tracking of on-farm development.

“Also of great benefit to our progress has been using all resources available, including working more closely with scientists and accessing external grants to help us access more knowledge and benchmarking information, which has helped to facilitate evidence-based decision making,” Bristow said.

“It’s critical as graziers we work together with all stakeholders, and take a holistic approach to everything we do.

“In doing this, we’ve also been able to protect the Great Barrier Reef. I think in the past, agriculture has been given a bad rap for its impact on the environment, but this shows we are closing the gap on that perception through these types of results.”

Undisputable results through a new mindset

The impact of the changes on Strathalbyn has also shown environmental outcomes need not come at the expense of business objectives. Only two years into the five-year implementation plan, production has increased by more than a quarter, with significantly greater gains ahead as the on-property transformation continues.

“We’ve gone from branding 3500 calves to, in the last two years, branding 4300 calves with significantly lower rainfall, and have increased the carrying capacity of the property by 1500 head per year,” Bristow said.

“But at the same time, we are having a positive impact on the Reef by boosting the ground cover of the whole property, and this has been achieved by increasing the number of paddocks and water points to allow us to better utilise some areas while resting others.

“Greater ground cover has also allowed us to heal small gullies and reduce run off dramatically, and we have significantly less sediment leaving the property which is very rewarding.”

In only the early stages of the overarching strategy, the Hughes say there is no foreseeable cap on the gains that can be made to both production and environmental outcomes.

“In terms of the long-term benefits, I just don’t know where the ceiling is, but I can’t see there ever being a point where you stop looking for more ways to improve – it’s been a complete change of mindset,” Bristow said.

“We’re also now more resilient in the dry times and make better use of what we have in the good seasons, so we’re able to better look after our land.”

This change of mindset is evident across the entire business, and it’s reflected in all measures of performance.

“We have better financial literacy, a better understanding of how a business should be operated, better land, grass and animal management, an increase in branding rates and breeder retention through increased conception rates, and better use of nutritional insights,” Bristow said.

“We’re growing more grass and retaining ground cover, and for us that means making more money. “The better we can look after our land the better it will look after us.”

One of the surprising off shoots of Project Pioneer, and working with RCS, has been the growth of staff capacity and their personal connection to the business as progress has unfolded before them. A clear plan has allowed employees and contractors to feel part of the process, and allowed them to celebrate in the positive changes and results.

“Our new management plan has really given people something to look forward to, and everyone feels a sense of accomplishment when we meet an end goal,” Bristow said.

“I believe we are definitely achieving more buy-in from employees, they’re excited to see how the land and animals have improved through the hard work they have contributed to the infrastructure improvements.”

As Bristow reflects on the fast-paced changes achieved over the last three years, he can only see further ambitious development targets being hit over the next five, by tapping into the key themes of managing and balancing grazing pressure, and increasing water efficiency.

“Three years ago, we had 14 main paddocks and four holding paddocks – now we have 49!” he said.

“Over the next five years I would expect to at least double that and, as a result, increase carrying capacity by 1500 head through better grazing management and land utilisation.

“Our personal long-term plan is to have 50,000 head by the time I am 50, so that obviously includes expansion beyond Strathalbyn. Our strategy to achieve this is to invest in places that are under-developed and underutilised, and to implement our learnings and hands-on experience here to help the country realise its full potential.”