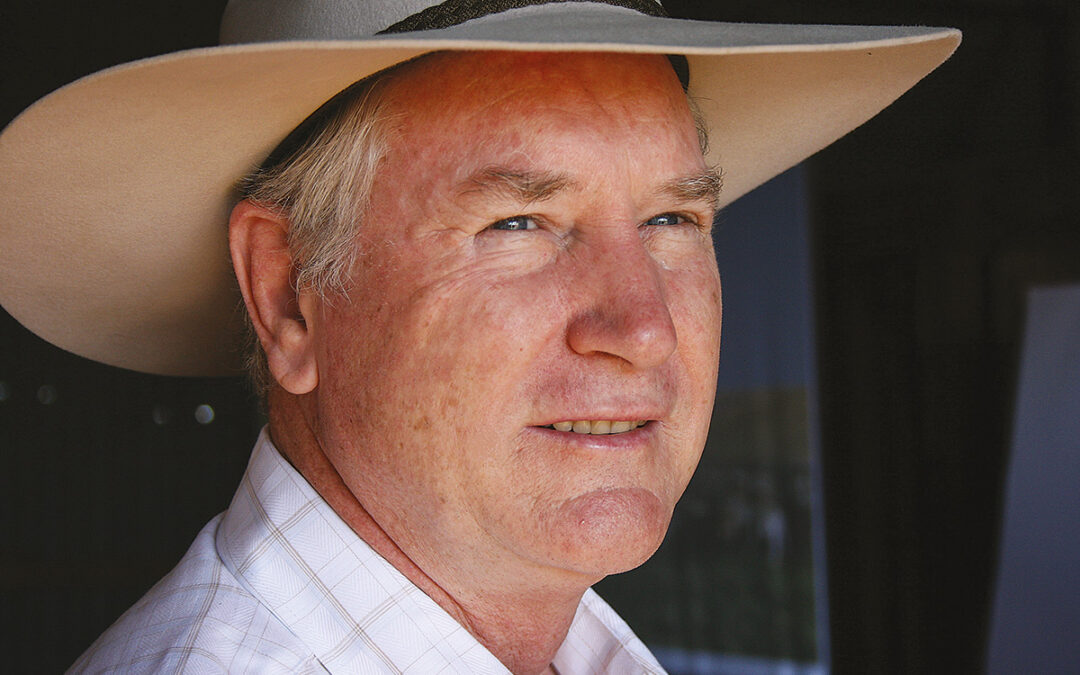 The enduring influence Dr Terry McCosker OAM has had on Australian broadacre production systems spans five decades and is considered by countless primary producers and industry influencers alike to be unrivalled across the nation’s agricultural sector.

A respected leader, his role in supporting producers to achieve farming enterprises that are sustainable in every sense of the word – from soil health to business and personal prosperity – means these days he may be considered as much a wellbeing advisor as pasture specialist.

“It’s an unbelievable privilege to be involved in the transformation of someone’s life,” said Dr McCosker who prides himself on the human approach he takes to land management.

He sees infinite value in a handshake, a real conversation and getting dirt under your nails.

Throughout his 50-year career, Dr McCosker has been credited with the introduction of supplementary feeding through wet seasons, controlled mating and pioneering holistic grazing in Australia. And, with more than 10,000 graduates of Resource Consulting Services’ (RCS) lauded land management education programs spread across the country, he believes success must stem from facilitating real change in people.

“Success is seeing transformation in their attitude, their joy in life and the enjoyment they get from seeing healthy landscapes and animals,” he said.

Terry kicked-off his professional life at a cracking pace. After an idyllic childhood on a dairy farm in southern Queensland, he was recruited to the Queensland Department of Primary Industries and traipsed through paddocks across the State, specialising in fertilisers and pastures. Not completely thrilled by the idea of being a long-term pasture specialist, he obtained a commercial pilot license, to provide a career options for when he eventually moved on from the Department.

Terry and his wife Pam were intrigued by the Northern Territory – in particular a property owned by an American group which was rapidly depleting funds and losing a million dollars a year.

“A million bucks a year was a lot of money in the seventies,” Dr McCosker recalled.

“They wanted somebody who knew something about growing grass, and that was my job description. We had a three-day interview and at the end of that interview, they said, ‘well, you’ve got the job’.”

It wasn’t quite that simple.

“I rejected it. I didn’t know the landscape, that sort of rainfall, I’d never worked in the tropics and I didn’t know the plants. I told them I didn’t think I could help and they said something to me I’ve never forgotten. They said, ‘We want somebody who has no preconceived ideas’.

“You wouldn’t believe how much that paid off. Because I didn’t know anything, I had to work it all out myself and discovered things and did things that nobody else had thought of because I came at it with fresh ideas and I had no paradigms about how things should be done.”

Dr McCosker went on to ‘solve the company’s problems’ in pasture and animal management and production, as well as some others they didn’t know existed. He credits keeping an open mind as the key to the learning that took place in the Territory, something he, to this day, instils in all courses delivered by RCS.

“It was the beginning of my approach to holistic or systems thinking. I learned to actually think through everything and then pull together the right ideas and make things happen. It was that experience which really set me up for what I’ve done for the rest of my life.”

From that moment, Dr McCosker became fixated on helping to influence the way pastoralists think about their relationship with the land, and in particular the health of their soil. He believed that existing extension services weren’t doing justice to releasing and effectively using the plethora of information entangled within the operation of a property and in land managers’ minds.

Together with David Hanlon, Terry and Pam launched Resource Consulting Services, or RCS, in 1985. It’s now considered Australia’s leading private provider of holistically-integrated education, training and advisory services to the agricultural sector, both nationally and internationally.

Dr McCosker said RCS was the first company to teach paradigms and ecology as underpinning the management of land – a concept now known as the basis of regenerative agriculture and an approach to production which has gained a growing profile and momentum over the last five years.

“We certainly spearheaded it and worked against unbelievable opposition for many, many years,” he said.

“There has been considerable progress made and I think give it another 30 years and regenerative agriculture will actually need to be standard practice because a lot of our current production systems are broken.”

RCS is responsible for countless land management programs and projects, including Project Pioneer which provides producers with the knowledge and tools to achieve sustainable and profitable businesses through farm management practices that promote soil health and biodiversity. Ultimately, it aims to reduce sediment runoff into Great Barrier Reef catchments. Like many RCS programs, relationship management and ensuring happy and healthy people is central to its success.

Dr McCosker pushes people’s thinking to places they don’t expect, or think they are capable of. While firm in his beliefs, he’s also happy to learn from his failures and tailors education to what it is producers need. One of the early hiccups of RCS was a 50 per cent attrition rate for some courses.

“We had started a little bit too conventional and employed people with a chemistry focus because, at that time, I guess I didn’t really get the importance of biology,” he said.

“To quote a recent graduate: RCS is like a plant, where what you can see is only superficial, but it has strong roots and they just keep getting deeper and deeper.”

“The biggest shift we made, which was a major contributor to our success, was bringing American molecular biologist, David Johnson, to Australia. He helped us understand that the overarching story is based on the microbiomes of soil, plants and ecosystems.”

While acknowledging the climatic harshness primary production in Australia must work with, Dr McCosker also challenges pastoralists attributing poor business performance to the unpredictability of seasons. He is resolute in his view it is possible to take control of these variables and has weaved a tailor-made tool into RCS programs such as Project Pioneer, to support producers in undertaking a deeper analysis of their business.

“I think we’ve adopted these myths that we can’t do anything about the climate or prices but I believe that we know a lot about those things and the variability in them. It really comes back to how we react to each situation, with good management and having the tools and the processes to respond effectively. We’ve taught lots of people how to do it.”

Interpersonal relationships are also critical to the success of agricultural enterprises.

“Women don’t have that luxury most of the time and so they’re often more receptive to change.”

Helping to support people and businesses to make this change is interwoven throughout Dr McCosker’s approach which encompass a diversity of powerful content – from goal-setting to ecology, grazing to animal reproduction, nutrition to soils. However, he knows the most powerful tool to facilitate change of all is communication, something he said gives couples and families a new language.

“Last year I finished a school in Rockhampton and I was just moving out of the car park the next morning. A young couple was about to pull out at the same time and I stopped to talk to them. She came over and gave me a big hug and thanked me for saving not only their business, but their marriage.”

This small gesture is perhaps proof that a holistic approach works just as powerfully for the land as it does those who are its stewards.